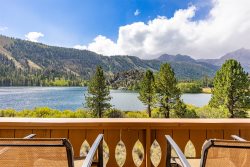 by Daniel Morton, St. Louis, Missouri. August 21, 2014.
Photography by Jeffery Howerton.
A few details about the lake:
Thousand Island Lake is absolutely amazing. It doesn’t seem possible that a place of beauty like that can feel so remote and yet be so close by. There’s no doubt you’re in the middle of wilderness. But it’s just not that far away. In fact, as the crow flies the basin is just a little over 4 miles to the southeast of Silver Lake on the June Lake Loop. If you’d like to go, good planning and preparation is all it takes to turn a dream into reality.

This trip was a long time in the making. Logistics and planning took about a year. But we couldn’t have timed the excursion any better. There had been lots of snow the previous winter. It was mid-July now. We were on horseback, all of our gear in tow, and heading into the Ansel Adams Wilderness for 6 days and 5 nights in the back country. As far as you could see in every direction, hillsides were bursting with wildflowers. There was still a fair amount of snow in the high country so that the streams were full. Rivers and streams were full. About an hour into the ride on the other side of the valley the roaring cascade of water pouring down from Shadow Lake came into view. The scenery was beautiful and the weather was perfect. It stayed that way all week. Every day the sky was deep blue with the sun shining overhead. Occasionally white, billowy clouds drifted by. Daytime temperatures hit the lower 80’s. At night, it cooled into the low 50’s.

Base Camp at Badger Lakes

It took a little over 4 hours on horseback to reach Badger Lakes. That’s where we set up the base camp about a mile from Thousand Island Lake. All of our gear had been packed in on mules, everything – from cot to kettle. It was late afternoon when we arrived. We didn’t have much daylight left. There was a lot to do. The first order of business was to set up the stove and kitchen, followed by the tents. There was water to be hauled from the lake, run through a water purifier, and stored. Maybe the most important of all was the setting up of "Stinky Pete". It’s a dirty job. Someone has to do it. But everyone agreed, no outhouse tent ever offered such a beautiful panorama from its flap.
Yes, it’s bear country up here. And they are very serious about eating too. No food of any kind is every allowed in the tents. Ice chests and food boxes are locked in bear-proof containers. There was still plenty of snow in the shaded coves around Bader Lakes. Keeping the food cold or even frozen all week long wasn’t a problem. We even brought a 5 gallon solar-heated bag for anyone who, after a long day of hiking or fishing, wanted to take a warm shower. But for most of us it was enough to put on a bathing suit grab the “hippie” soap and jump into the cold, but refreshing waters of the alpine lake situated roughly 50 yards from the camp.

At Night, the Heavens

Nighttime in the wilderness has a beauty all its own. There are no city lights. On top of that, we were under a new moon. So the nights were pitch-black. There was nothing to obscure the stars. The full Milky Way stretched across the heavens from end to end. Diffused light filled the sky. It seemed to cast a shadow on the ground. It was a little chilly. We bundled up and sat under the stars for hours watching shooting stars and the occasional satellite trekking across the sky.

On the Pacific Crest Trail

From the base camp we set out on day hikes. It’s about a mile to Thousand Island Lake, a relatively easy ascent on the Pacific Crest Trail. The trail winds through meadows dotted with pine trees. Over the last quarter of a mile you begin a steeper ascent through a landscape mostly of granite. As you approach, the sound of babbling brooks begins to fill the warm summer air. The trail tops a ridge and you being descending into a little network of tributaries that feed 3 or 4 pretty big ponds. There were wildflowers everywhere. You’ve reached the crossroads of the John Muir and Pacific Crest Trails. To the left are the headwaters of the San Joaquin River Middle Fork, to the right is Thousand Island Lake.

The lake is at timberline. The water is a shimmering blue. The mountains are silhouetted against a deep blue sky and are reflected back at you on the surface of the lake. Ice flows drifted lazily across the surface. Every now and then, the warmth of the summer day is interrupted by an unusual sound—the cracking and popping of ice followed by the swooshing of an iceberg as it crashes into the lake. Ice coves around the edges of the lake were melting and calving ice flows as they retreated. The scene is one of wonder and beauty. It is absolutely amazing. It is an idyllic place to be, just to sit at the water’s edge and soak up the sun while taking in the panorama all around you. To the east is Banner Peak and Mt Ritter. To the west you can see Carson Peak. In the distance to the south you can see Mammoth Mountain. To the north lay the open wilderness, and beyond that, Yosemite. Every way you turn it’s a skyline worthy of a photo that should become a postcard.

If you are a fisherman, the lake has plenty of trout in it. Be sure to bring a fishing license, fly-fishing rod, and tackle. We were fortunate enough to catch the tail end of the of the trout spawn. Yes, the fishing was lots of fun, but the catching was even better! We caught Rainbow Trout of every size. A seasoned fisherman in the group put it this way. I’ve fished a lot in the High Sierra. I’ve never seen fly-fishing in the back country like this. He shook his head in amazement and said catching 15” - 19” trout one right after the other; it just doesn’t get any better. We’d planned on catching enough fish for two evening meals. It wasn’t a problem. If fact, we released more than we caught.

Bouldering up the Middle Fork

A couple of times some of us decided to approach Thousand Island Lake via a different route. We bouldered up the Middle Fork. Water’s edge from the base camp is about a quarter of a mile away with a descent of about 400 feet down a slope to the river. Though the water level was high, it was an easy ramble all the way up. Going was slow. Amazingly, we were able to hug the river the entire way. The overall ascent to the headwater is about 600 feet in elevation over the course of roughly 1 mile. The most amazing part of the ascent, in my opinion, is the last eighth of a mile, at which point there is a steep rise of about 200 feet where you enter a granite landscape. It’s like a gorge carved out of the rock. The water moves fast. At the very top there is a waterfall of about 50 feet. You can climb into the gorge and stand at the base of the fall. As we listened to the crash and roar of the river we could see a rainbow ridge of colors unfold in the spraying mist. 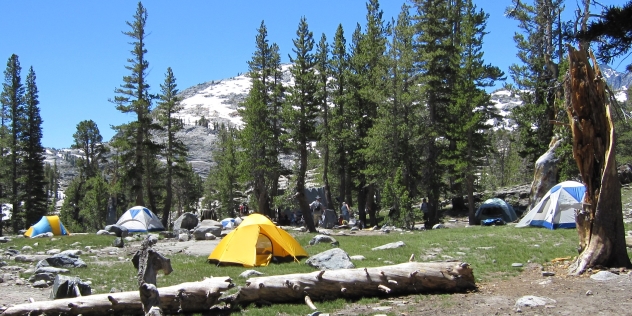 Climbing out of the gorge, you can ascend to the top of the waterfall at the headwaters of the San Joaquin Middle Fork. There are huge, flat-top granite boulders on either side. It’s safe to walk out on them. There is a large, tranquil pond behind the waterfall. The gap between the boulders at the headwaters is about 5 feet across and 4 feet deep. Water roars by. It is much too dangerous attempting to cross; the drop on the other side is about 50 feet. It’s very impressive to watch. From there it is a short walk around the pond, across the tributaries and streams to Thousand Island Lake.

Back to the Trailhead

Alas, one’s time in the back country goes by far too quickly. There’s so much to do, and not enough time to do everything you wanted to or maybe intended. It seemed fitting the day we broke camp to pack out that storm clouds should gather above the Ritter Range. The sky clouded over. Lighting flashed. Thunder echoed across the valley and rain began to fall. But we’d prepared for that too. We climbed on horseback and struck out for the High Trail leading down to Agnew Meadows. All along the way we were able to keep just ahead of the rain. The horses plodded along as we made our way down to the trailhead. It had been a wonderful experience, a long time in the making, and it did not disappoint. We may have left behind the wilderness, but we brought back with us unforgettable memories that last a lifetime, and a passionate desire to return. We know what it takes to make that happen. We know how to get there. I say there’s no time like the present. Carpe Diem! Seize the opportunity! Let’s do it!

Daniel Morton is a technical writer with CenturyLink working on FedRAMP security adoption for their cloud services product. His love for the High Sierra’s started years ago when he and his older brother, Don Morton, began making weekend excursions into the Cottonwood Lakes area outside of Lone Pine back in the day when they were both in high school. That love for the mountains only grew and deepened. Today Daniel lives in St. Louis, MO with his wife, Laura. Their children, Abigail and Jesse, with their families live nearby. They have one grandchild. In addition to his daytime job, Daniel is also a canonically ordained Orthodox Christian priest. Don and his wife, Lynn, live in June Lake. For us, that’s an added incentive to return to the High Sierra’s as often as we can.
All Rights Reserved - Copyright 2014 June Lake Accommodations

Acclimatizing is a good idea. You’ll want to arrive a little early as well to organize and stage before your trip into the High Sierra. Then, after packing out you’ll probably want some time to clean gear and rest for an evening before the journey back home. Our small town offers plenty of "home town" accommodations including vacation homes and vacation condos. All rentals are very clean and well maintained, very affordable; and all are close to Gull Lake and June Lake. We also have pet friendly vacation rentals. Are you looking for a romantic weekend or an extended stay with family and friends? Hoping to catch a "lunker" trout, go skiing on June Mountain, test your skills on the hiking trails, or bike the June Lake loop? Whatever your vacation desires may be, let us help you book a June Lake Accommodation that will keep you coming back years from now. Call us today, or book online. Call the friendly staff at (760) 648-1919 to plan your next vacation. They will be happy to help you.